Give Me The Job!

Earlier in the year I tried to get a job as a Reference Assistant at the Minnesota History Center. I came pretty close, but ultimately didn't make the cut. However, a new reference assistant position has opened up! Thus I am making a second attempt. This time I'm going all out. Will a decorative envelope be enough to impress the people in HR? Probably not. Will that stop me from doing it anyway? Never! 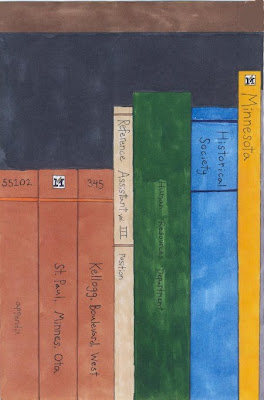 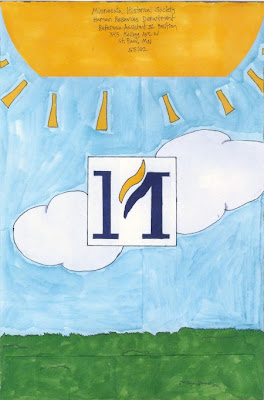 Because I'm not sure what kind of postage this thing required (61¢ in case you were curious) I took it to the Post Office. However, it turns out the Post Office does not appreciate it when you mess with addresses. Here is an approximate transcript of me getting told off:

[The man at the Post Office looks at it for a couple seconds.]
Post Man: "So is this the zip code here off to the side?

Post Man: "I get that you think you're being cute or whatever, but it messes with our system when you don't put the zip code in the proper place."

Jesse: "Ummm...yeah, but I put the full address on the back as well, so I thought it'd be okay."

Jesse: "Uhhh, sure...I'm not too worried about it though."

Post Man: "I'm just trying to help you. I mean I'm sure you don't want your stuff to end up in Tallahassee or where ever."

Since I never make a fuss in person, preferring to silently fume about it, I'm gonna take a moment say a couple things.

1) Zip code properly placed or not, if a computer could make sense of an address this off beat I'd be throughly impressed.

2) The guy noticed the zip code's location in 2 seconds. I would imagine if the computer can't make sense of it, then a person will end up looking at it and 2 seconds later it'll be on its way.

3) Tallahassee? The History Center is like 10 miles away from that Post Office. If the United States Postal Service misses its target by 1,300 miles then they aren't anywhere near as competent as I gave them credit for. So really, Mr. Post Man, you are pointing out your own failures and not mine...dick.


Well, with any luck my envelope will get to its intended locale and not stop off for a stint in Florida's capital. With some even more luck I will get the job. Here's hoping.
Posted by J-Sea at 11:17 PM 1 comment: