Yup, I'm pretty sure my yeast is dead. It really isn't surprising when you consider it is getting kind of old and I wasn't aware you're supposed to refrigerate the little guys after opening. The pizza I made with it was still pretty awesome. Pesto sauce topped with mushrooms, olives, garlic, and mozzarella.

This wasn't supposed to be today's comic; I did this one last minute. I have multiple comics penciled out and then I've been getting lazy about actually inking and coloring them. I've also been distracted with writing a script for an actual comic. Get some practice in doing that sort of storytelling. It is sure to suck, but I've got to spin shit before I can spin gold. Well that story is going to be awhile anyway. This week will be more of the same and then I've got something special planned for next week's installments.

My birthday is tomorrow. I'm not sure what to feel about that. Someone should give me a job as a present, that would be awesome. I should also get myself some Joel Plaskett music so I can stop listening online. Damn those Canadian musicians and their quality tunes! Hmmm...I should probably ink Thursday's comic sometime today so I don't have to worry about it on my birthday.
Posted by J-Sea at 12:44 AM No comments: 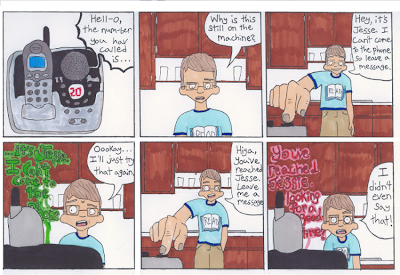 I really hate listening to my voice on a recording...or seeing myself on a recording. I eventually gave up trying to get a message that isn't lame, because it just wasn't happening. I doubt it ever will. I need to get on "Wait Wait Don't Tell Me" so I can try to get Carl Kasell to do it for me.

It is kind of sad that I can look at stuff I draw and not be happy with it. Yet at the same time I'll look back at old stuff and that is all even worse. It seems that despite improvement I'm still not satisfied. I suppose this is a good thing, but it still annoying. I'm eventually going to stop doing these journal comics and get into a fictional strip, but I want it to have some structure and therefore it'll take a while for me to figure out. Until then you'll have to put up with my boring exploits.

Scheduling these automatic updates hasn't been working out too great in recent updates. I must be doing something wrong. Well here's hoping it works this time.
Posted by J-Sea at 12:01 AM 1 comment:

I Should Be Cleaning

It is often quite hard to muster the gumption to stop what you are doing to go clean, but perhaps that is just me.

---------------------------------------------
Jesse reviews “Shadows Over Baker Street”
----------------------------------------------
Although, I'm sure you can't tell, in the comic I tried to recreate the cover of the book I was reading at the time: “Shadows Over Baker Street”. It is a collection of stories written around the theme of combining Sherlock Holmes with the “nightmare world of H.P. Lovecraft”. As many people know I'm a big Holmes fan so needless to say that the book intrigued me. While most of the stories are quite entertaining, I have to admit that after reading enough of them they started to get old.
The problem as I see it was that the editor didn't give enough direction to the authors. As such the authors all took their favorite elements from Holmes and put them to use. However, you soon realize that most people like the same things. While Sir Arthur Conan Doyle knew the last story he had written and could change up the following tale to prevent them from being redundant, these stories clearly didn't have that luxury. To add insult to injury the contents section lists the date the story was to take place next to its title: as if they are chronological or something. This seems rather foolish considering that half of them make some mention of the paranormal nature of their case being shocking and unbelievable. You would think that Holmes and Watson would start to get used to the paranormal after the first couple adventures.
The particularly unique stories are really the only ones I can remember. Sadly they all came in the first third of the book. Neil Gaiman's “A Study in Emerald” was absolutely fantastic and that is coming from a person who typically doesn't care for Gaiman's writing. If you're a Sherlock Holmes fan like me I'd certainly recommend this book, however, I'll warn you that there really isn't anything too memorable after “Art in the Blood” (the sixth story in the book). After that point the stories stop being as varied and unique.


P.S. I certainly hope Rosemary realizes that I've had to memorize bits of html code in order to put indentation and proper quote marks into this post and appreciates it accordingly.
Posted by J-Sea at 1:14 AM No comments: 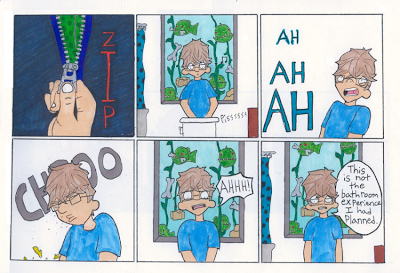 Not only is this a true story, but this has happened more than once.

Because you just know I'll end up forgetting about an update one day, I've decided to start writing these comic posts ahead of time and then setting them to post on the correct days. Less work for me, on time comics for you. It's a win-win situation.

On a side note there is indeed a painting of fish in my bathroom for some reason, however, they are not piranhas. I'm just as disappointed by this fact as you are.
Posted by J-Sea at 12:18 AM 5 comments: 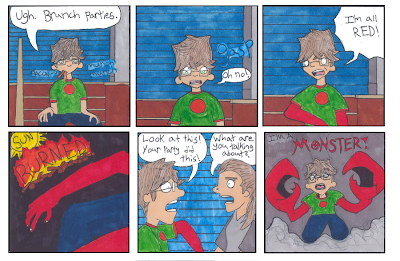 So far every time I've tried to update on a schedule I've failed. However, that wont stop me from trying again. From now and hopefully into the distant future you can expect new comics every Tuesday and Thursday. In the spirit of this new update schedule I've even made a new header (or whatever that thing is) for the site. There are a lot of things about this site I don't care for, but I don't really want to bother trying to learn a new system at the moment. For now I'll settle for making minor aesthetic changes to these one.
Posted by J-Sea at 12:01 AM No comments: 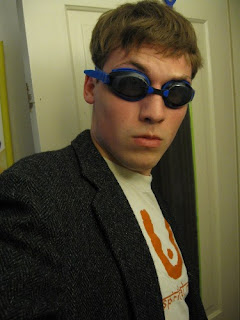 I was going to do post a picture of a new comic today, but then I remembered that I'll be able to get that cord from Max tomorrow. Why bludgeon your eyes with sub par goods when I'm so close to being able to present full quality goodness? Instead here is a random picture I took.

Now if you'll excuse me I'm off to cook something up for dinner then watch Back to the Future III. I've been told that it's actually a decent movie if you think about it on its own and not as part of a series. I haven't seen it in a very long time, so I figure I'll put the theory to the test.
Posted by J-Sea at 7:22 PM 5 comments:

The Difference of Color 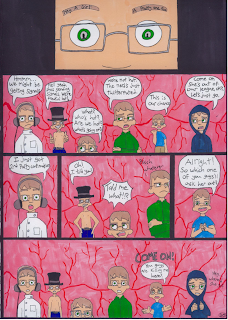 Bleh, I do not like taking pictures of colored work. However, I won't be able to finish the strip I was working on today until late tonight, so here is the colored version of yesterday's. Yay for color's ability to distract from crappy line work. I know I've said I've started doing backgrounds in all my comics, but I'm really not sure what the inside of a mind looks like. So I think pink w/ veins is a pretty decent representation.

I've been asked who they all are, so in order of appearance: Perception, Ego, Inner Child, Pessimism, He-Who-States-The-Obvious, and Doubt.

[EDIT] I replaced the camera version with the scanner version, because it just looks better that way.
Posted by J-Sea at 9:59 PM 2 comments:

Inner Voices or: Plan B 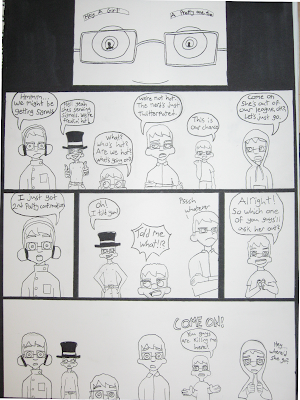 A rough camera photo of the comic I did today. I'll fix it up, add some more detail, and color it later. By later I of course mean once I get back the capability. I just felt I should keep up my streak of posting that I seem to have going this week. Also since I mentioned this incident a couple days ago, the connection might be lost if I didn't post it now. There are parts of it I love and yet parts of it I despise. I really need to work on some things so they'll stop looking like crap.

Trying to think of strange outfits for the various parts of your inner dialogue is actually quite fun. Having my sense of pride wear a top hat and no shirt, personally, cracks me up. Also I've now memorized the html code for with which to add indentations into this blog. While it is a bit of a hassle for me, I'll do it for you dear readers. Although I doubt you really care.
Posted by J-Sea at 12:07 AM No comments:

A Taste of Things to Come 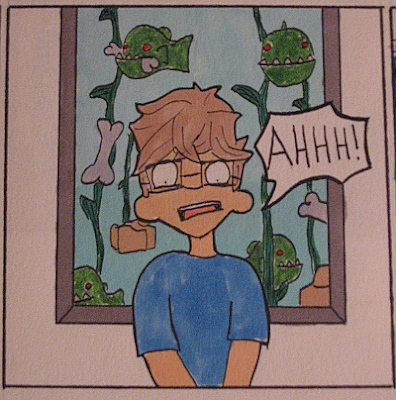 The good news is my sister has returned the scanner's power cord! This means that I'm one cord away from updating comics once again and luck have it Max has told me he'll let me borrow the cord I need. Apparently he's had one that he hasn't needed for a few years. In anticipation for upcoming comics here's a sample panel from the stuff I've been working on. As you can see I've been doing everything in full color and even trying to do background work as well. Hopefully those things will start to improve over time. There is an inherent problem with confirmation. On one hand having someone back up your original inkling can be great. "Hey I was right? Awesome!" On the other hand it prevents you from using plausible deniability. "Hmm I wonder if I was getting a vibe from that cute waitress? Probably not. Oh well". Unfortunately both my cousin and my aunt were around after dinner to inform me that such a vibe was certainly there. However, finding these things out afterwards racks my brain with a bad case of the woulda-coulda-shouldas. Wikkawikka Poetic Remix! Oh waitress rare of features fair, has my thoughts in solitaire. A time so brief, yet by this thief, leaves my mind in disbelief. Alas! Allay! Perhaps to meet another day. Wikkawaaah.

A sily combination of pictures, poems, and moments from my awkward life. I do believe I've met any requirements there might be for a good artblog post. As that was my goal I shall bid you adieu.
Posted by J-Sea at 10:34 PM 4 comments:

Here's a little facebook graffiti I drew today to tide you over while I'm without scanner. It is a theme continuation from the "Carolyn V.S. The Sphinx" one I did awhile back. I did it a lot faster and I think it looks a lot better. Perhaps I've improved a little.
Posted by J-Sea at 12:11 AM 1 comment: