I could rant all day about why Twilight is horrible, but I won't. I am just not qualified enough on the subject. I have made 2 attempts to read Twilight and they have both ended in failure. My first attempt resulted in me reading one page and then walking away from it to sit in a corner and worry deeply about all the people I know who love that book. After taking a few minutes to gather myself I tried again. This time I made it to page 3, whereupon I decided that I just couldn't bring myself to impose that level of punishment against my brain.

With only 3 pages of Twilight under my belt, my knowledge is primarily secondary. As such, I won't make you sit and listen as I complain about the things I've heard. I will, however, take a moment to point out a couple people who do have firsthand experience with Twilight. They are more skillful than I am anyhow.

Alex Day Reads Twilight
Alex Day is a video blogger who decided to film himself reading Twilight and record his reactions to it. It is, in short, hilarious. It is basically what you would get if Mystery Science Theater 3000 riffed a book instead of a movie. If you're like me, curious about Twilight but unable to actually read it, then this is perfect. You get all the plot and a million times the laughs.

Reasoning With Vampires
A friend of mine just sent me the link to this site today. It is a blog where the author has done what the editors should have and taken a red pen to the Twilight books. With both wit and interesting typography she points out the books' many, many failings. I have actually written this whole post largely as an excuse to share this link.

We all know about those momentous landmark ages. At 16 you can drive, at 17 you can see R movies, at 18 you can smoke, at 21 you can drink...and that's it. There's so few of them! You have a whole life to live and yet there are so few occasions to revel in the unlocked features of a Level Up. Or are there? I have looked into it and collected some of the unlocked abilities that are out there for all of us to look forward to and enjoy.

Additional Landmark Ages
+Congratulations! You are no longer a blood-sucking parasite living inside of a host's body. Now you can move on to sucking time, patience, and money from them instead.

+Celebrate by paying to ride the bus! Coins clanking into slots, bills sucked out of your hands, transfers appearing out of nowhere...what fun!

+Choking on things just isn't as much fun when no one is telling you not to.

+Because being a teenager just wasn't challenging enough.

+Now that you are interested in dating, being a fully certified SCUBA diver who can sing certainly won't hurt your chances.

+Try combining them all for one hell of an event.

+Celebrate by jumping in your plane and spraying pesticides all over Cary Grant.

+Combine them all for an insane night...in a jail cell.

+Because you can't have one without the other.

+You've had a poster of J. Edgar Hoover over your bed since you were old enough to pay for the bus. It's time to live the dream!

+ Or you can rent a car and run from Congress.

+And you didn't even have to chop of an extremity!

+Apparently when you're old enough to be a beer drinking jockey pilot for the FBI you're no longer Idol material.

+Besides the money, the fame, and the power, there really isn't an upside to that job.

+Psssh, you didn't want to join their crummy club anyway.

+Suck on that, whipper snappers, this early bird special is hella afforable, yo!

+Time to enjoy the fruits of your taxes, you socialist.

+Your whole life has been leading up to this moment!

+You've been dead for over a year and brownnosers are still trying to lick your backside.

+Dangit, I guess there are some upsides to being President after all.

+Do them in that order for an even more prestigious landmark.

+Clips from your movies will be shown at will as bookstores compete with one another to see who can slap the best cover art and discussion guides onto your books...or no one will care because your copyrights were lame.
Posted by J-Sea at 5:16 AM No comments:

Yep, I'm still sending out job applications. The one featured here is for the position of a Clerk/Cashier (a position I like to call "Clashier"). This time I'll even give you a taste of the cover letter I sent with it. 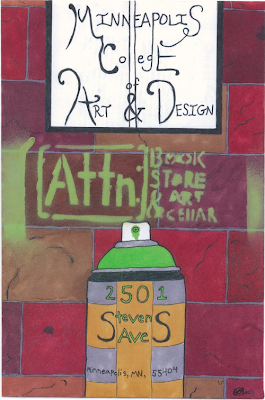 “Because this position is for a Bookstore, I should mention that I am, in fact, literate. Now I know what you are thinking, ‘How can we be sure you are literate and not merely paying a relative to read this job posting to you and take your dictation for the application?’ A good question. But would a relative of mine be able to correctly spell 'Cincinnati'? I think not.”

Since this position is also for an Art Cellar, I should mention that I can, in fact, art. The envelope this letter came in will depict that I am familiar with both art materials and processes. Now I know what you are thinking, ‘How can we be sure you didn't just hire a relative to create that envelope art for you?’ Another good question. But would a relative of mine have had the forethought to hide the word 'Cincinnati' in the lower left-hand corner? I think not.” 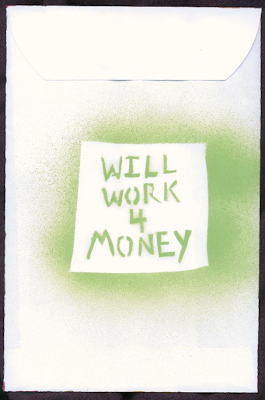 The mere fact that I have enough free time to make things like this is proof that I need a job.
Posted by J-Sea at 1:04 PM 3 comments: