There's a monster here.
It hides underneath your bed.
It watches you sleep.

Drip, Clank, Skitter, Creak.
Just normal house noises, right?
But how sure are you?

In the dark they come.
Leaves crunching under their feet
and greed in their eyes.

Blades put into treats?
Just a myth, but just in case
I'll put gauze in mine.

Bobbing for apples.
There's just no excitement there.
Unless you add eels.

You're going to die.
It happens to everyone.
STOP RUNNING AWAY!

The ultimate feud!
No, not Werewolves and Vampires.
Ghosts versus Zombies!

Children cannot see
unless you carve out their eyes.
...or is that pumpkins?
Posted by J-Sea at 2:30 PM 1 comment:

Why Do I Do The Things I Do?

You know what? I've never used poetry as an emotional outlet or anything of that sort. No, when I try to write a poem it is generally because I'm trying to be impressive, or because I find them amusing. Thus it seems I usually end up posting them on people's Facebook walls. As I feel bad for having been so awful at posting stuff recently I've decided to bring you some this Facebook Featured Poetry.


Double Feature:
Double feature picture show!
Lots of creatures fast and slow!
Why are you waiting? It's time go!

2for1 on Science Fiction.
Super old, so no age restrictions!
We've got Space ship laser gun depiction
and defiance against alien conscription!

The Heights will feed your nerdy childhood addictions,
with tons of classic science fictions.
Forget your spouse and forget your teachers
It's time to sit in theater bleachers
for a science fiction double feature!

[yes I realize there are no bleachers just comfy chairs,
but rhyming is hard and who really cares?]


Peter's Birthday Rap:
That's right, he's Pe-ter,
and even Je-ter,
isn't nea-ter,
except in the bathroom
cause Peter pees by the liter.

On the manly guage,
he can't be upstaged,
became a pokemon trainer when he came of age.

He lives up in space,
fights with a mace,
and with a regal grace,
he'll smash in your face.
But he always carries an umbrella
just in case,

But his life history,
is not a mystery,
cause his Facebook page,
says he's gained an age,
which means I just gots to say,
with some word play,
have a Happy Birthday
O-kay?

[Tokushima burg,
It has the dance festival!
...that's pretty much it.]


Why Is There A Band-Aid On Your Arm?
Because my current occupation
has contract stipulation
against virus inundation
causing patient devastation
and to stop such an altercation
I had this needle penetration
deliver a vaccination
to prevent an influenza infestation.
And that's the explanation
to this band-aid presentation
on my arm.

It's a Nora Borealis
and it's set the sky aglow.
The heavens a dance palace,
casting colors to and fro.

It's a Nora Borealis
and the atmospheres a stage,
take to the air like Daedalus
as you dance away your age.

There's something in the sky today,
a cosmic celebration.
It's Nora Gay's birthday today,
so join in the jubilation.
Posted by J-Sea at 1:00 AM No comments:

It's another Mix CD cover! As per usual it sports a snazzy anagram name titles. Although, as you will probably notice, this time I didn't plan things out well enough and the bottom part of the title is hard to read, but I suppose that is what I get for rushing to get it done. Where's ctrl+Z when you need it, eh? 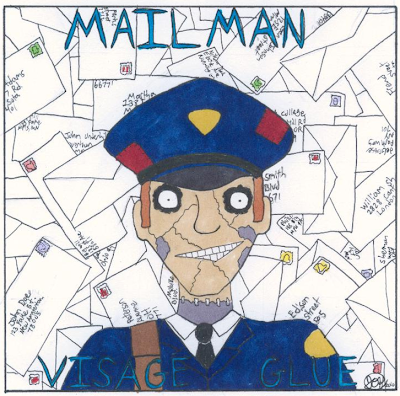