I've started a new project: Letter Extravaganza '09. For those of you who use Facebook, you already know that you accumulate a number of "friends" who you don't actually ever talk to or write to or anything to really. To combat this problem I made an offer to all of them to send a real, honest-to-God letter to whoever requests one. I have 102 Facebook "friends", which means that if they all responded I'll be doing quite a lot of letter writing, which sounds pretty cool to me. Although so far the response rate is about 32%.
This whole project would go pretty fast, but I've also been doing envelope art for all the letters which significantly slows things down...that and laze. For once I've actually been remembering to scan the envelopes before I send them out, so that means I can post them here (Sans addresses of course). The images I do usually have something to do with the person I'm sending it to, but like an inside joke I won't bother explaining them. So without further ado here's the first five. 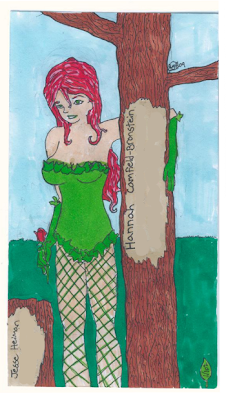 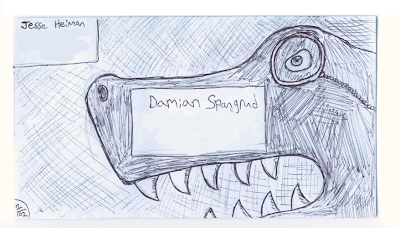 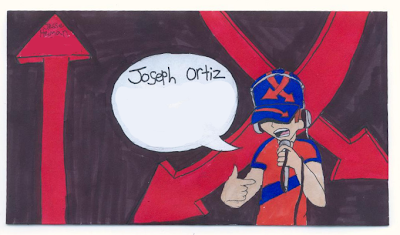 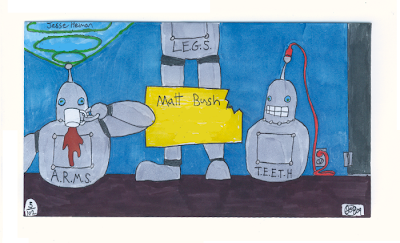 I feel bad about my horrible lack of updates, so I've decided to treat/torment you with more random snippets from my documents folder. This time from the uncompleted work Monk.odt . We find our hero, Ms. Rita Hallows, at the home of Alric Consensio, an unsettling man who reeks of narcissism and wealth. Rita has come by his request to help his wife, who has just gone into labor. At the moment Rita has just arrived and noticed two things about Consensio's wife: the woman is absolutely terrified and she is missing her mouth. From nose to chin is nothing but skin.

"Ms. Hallows realized that her mouth was agape: a ring of surprise and disbelief. There were too many emotions for her to give any one in particular prominence. Shock, fear, surprise, disgust, and sadness all hit her at once, jangling her nerves and chasing any sense of composure she once had out the door. The woman looked toward her with pleading eyes; the large eyes of a child or animal that seem not to be pleading with your face, but with your soul. Who could have done something so heinous to this poor woman? Sure there were people with the necessary power, but those select few people born with access to the mystical arts were always found at a young age and taken elsewhere to be trained. Who on earth could Consensio have crossed paths with that would have access to such power? Before her mind had a chance to think about these questions any further Consensio interrupted her.
'I do realize the shock you must be in, my dear Miss Hallows, but do consider the little life that is this very second attempting to find its way out of my wife,' Consensio said as the bitter tone of his voice encased every word. 'After all...,' his cruel smile crept back into view, 'it isn't polite to stare.'"


Once again I have no idea where I was headed with this one. I think that this was what I had originally started when I did Nanowrimo a couple years ago, but quit after a few pages to instead write on another idea. Speaking of National Novel Writing Month, it is here already. I wonder if I should try to tackle that challenge again this year...oh decisions, decisions.
Posted by J-Sea at 3:29 AM No comments: