When you're at the Ocean you might notice the noise. It isn't quiet. Even on a calm day you can hear the noise constantly. The roar of the ocean, as some would say. Personally I think it is more like a growl. As I sit here looking out at it I've come to the conclusion that the Ocean is disturbing. Like the man at the grocery store who wears sandals with socks or your ex in the arms of someone else; there is just something unpleasant about it. It is unnerving to watch, but to turn your back on it would be welcoming a knife in the back. Assuredly some will laugh at this idea, after all it is just a bunch of water. So what makes this particular body of water so disturbing.
For starters the Ocean is big. So big you cannot even comprehend just how big it is, but lets try anyway. The Ocean is approximately 321,000,000 cubic miles. In other terms the Ocean roughly has a mass of 13.6*10^20 kilograms. I, on the other hand, have a mass of about 85.56 kilograms. To create an even better picture visualize it in terms of gallon milk jugs. I am about 22.6 milk jugs. The ocean is 360,000,000,000,000,000,000 milk jugs. For every gallon of my milky being there is 1.6*10^19 gallons of ocean. This means that while I would fill up your fridge, the ocean would fill up over 58,000,000,000 oil tankers. When you think of something that is that much bigger than yourself it is no wonder we've used names to divided it up into sections. It is just a way to try and make sense of it. The Ocean is one of the only places on Earth where we still have little to no idea exactly what goes on in its depths. Sometimes a body will float up from the dark and we'll look at it, shit ourselves, then silently hope these things stay where they are.
The Ocean is filled with crazy ass things. Squid so large they can tear a ship to pieces. Man-eating sharks so perfectly evolved that they've barely changed over the eons. 100 foot aquatic mammals. Creatures that are bioluminescent, color changing, poisonous, limb regenerating, organ spewing, spikey, tooth-filled, and tentacled. If there was one that was all of these things you probably wouldn't be too surprised...unless of course that all described the kid who comes to pick up your daughter for the prom. Although if that was the case you should probably be more worried about your daughter's strange taste in men.
If creatures such as these weren't enough, the Ocean itself is practically a living thing. Like pumping arteries waves are sent to across its body and as the tides go in and out: the gigantic pulsations of makeshift lungs. This body of water can smash things with force enough to knock down a house or bend the lands to fit its shape. It can grab you in its current and pull you down into its depths. You can't really fight it, at least no by normal means. It warps around your blows and takes a deaf ear to your words. Its water isn't live sustaining, its just full of salt.
I'm not saying the Ocean isn't interesting or exciting. Perhaps deep down it is great and I just don't understand it the same way others do. Regardless, I don't like the feel of it. So I don't care what people say. If you aren't just a touch freaked out by the Ocean then there is something wrong with you...same goes for anyone who wears socks with sandals.
Posted by J-Sea at 2:37 AM No comments:

I don't know if you people know of it, but there is a site called Passive Aggressive Notes. People take pictures of passive aggressive notes they find and they get posted on the site. Needless to say it is awesome. I was looking at this one just now and saw the poem someone had written.

Now I will never claim to be much of a poet, although I think its fun coming up with fun rhymes from time to time. But come on people! None does not rhyme with Gone. It doesn't matter that they end the same way, just say them out loud and you'll see. None rhymes with Bun, Fun, maybe even Bombing Run . Also rhyming Hold with Behold? Seriously? What is this amateur hour? I've seen children with more aptitude for rhyming.

Oh I can't stay away from you, dear blog. Although I took a little break I'm still the most active blog of the people I know who blog. This is sad. They should all be ashamed...although not as ashamed as those of you who don't provide anything to entertain me. What am I supposed to read while on the Internet, huh? I demand satisfaction. 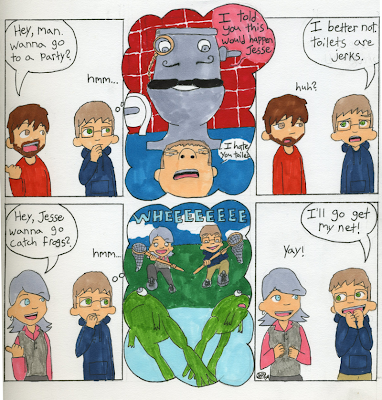 +I'm not antisocial. Just a strange kind of social.

I figured I'd do a somewhat nicer one than the junk I've been spewing onto your shoes recently. I wish I had more markers. It is quite hard to try and spread them out sometimes with my limited color range. It does, however, give me a nice excuse for not doing backgrounds. I should be studying, but I decided this needed to get done because it's been partially done for a few days and I've started to hate it. Like eggs or milk my comics are tasty at first but quickly go bad.

What have I been up to recently? Going through the motions I suppose. I feel I've been more awkward than usual today. Like when I played a beat on my juice bottle's pop-top in order to pretend I didn't see someone and thus didn't have to give them the stink eye. Mission I'm A Lamewad: Successful. I blame my hair for being super goofy today. It is doing something truly strange in the back and I can feel it is weird, but I have no means of seeing what it looks like. However, this might be for the best.

I had some other things to say, but they escape me at the moment. Perhaps they'll come to me later...they probably won't.
Posted by J-Sea at 11:47 PM 3 comments: