Cords, Where Art Thou

My scanning capabilities are still nil as I don't have the cords to the scanner yet. When I get scanning abilities are back rest assured there will be many a comic on the way. In the mean time here is some envelope art from when I found that I had accidentally packed a library book and needed to send it back. 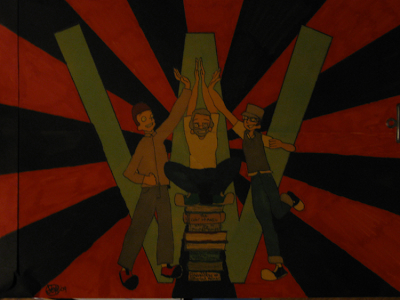 If you worked at Watzek Library you'd probably recognize those people...hopefully. Although I seem to have cut off the top of the envelope where I had written "Go Team Watzek", I'm pretty sure it is still pretty obvious that I based it off of Hank and Dean's "Go Team Venture" pose from The Venture Brothers.

I am almost done with the "I Read Your Crappy Blog" contest from last year, which is pretty pathetic. I forgot to scan the last envelope, but oh well. I forget many things. I'll be sure to get the last one scanned.

I know I haven't been updating very often, but that is all about to change. Recently I've stopped reading a fair number of webcomics, because in my opinion, despite their popularity, they have become very weak. However, who am I to judge them? So I need to pick up the pace and start working to make something better. This past week I've been building up a bit of a comics' buffer and I'll start updating on a schedule next week. Well, that is if I can get my sister to return the cords to her scanner/printer, long story.

I know the list of webcomics I read over there on the left is pretty long, so I'll help you out.

Jesse's Top 5 Favorite Webcomics!
1. Sinfest - Although it tackles much more adult themes, I consider Sinfest to be the closest comic to Calvin & Hobbes that I've read. They both comment on the world in a kind cartoon sort of way and are hopelessly endearing. Above all they just make you feel good.

2. Octopus Pie - Unlike a lot of webcomics Octopus Pie is a story. Even though all the comics work together to tell a story, each individual comic is entertaining in its own right. It is all about the characters and the characters are all captivating and well developed. It is also one of the few comics I can fully recommend starting from the beginning, because it is all fantastic.

3. A Softer World - I tell everyone about this one, but not many actually start reading it. It tends to wander from heart warming to depressing and all the humor in between. I don't know how it does it, but it manages to say things in a way you'd never have thought of.

4. Johnny Wander - For a comic so simple it is wonderful. Not only that, but it creates great mental images that make it surprisingly memorable.

5. The Abominable Charles Christopher - The art in this comic is just breathtaking. Never before have I seen a comic that combines writing and art so perfectly. You can just hear how each line is delivered. It goes between a main story involving a simpleton Yeti and the side stories of the various creatures of the forest. If I liked the main story more this comic would probably be #1, but it is a little too...poetic at times. Regardless it is a ton of fun.
Posted by J-Sea at 5:08 PM No comments:

Yesterday I found a letter in my mailbox from myself. It turns out I was forced to write it during my freshman year. Here it is for your enjoyment minus the parts I clearly wrote to use up the page.

Dear Putz,
I am currently being forced to write a letter to you. Why I would want to talk to you is beyond me. It is like talking to a wall, you'll never get a response. From the wall at least, everyone passing by will mutter insults and speed up as they pass you. I've tried writing you before. I am still waiting for your response.
I'm sick today and not in the mood to be writing you. I showed up late to class because the printers at this school suck. I've got my drawing mid-term coming up, so that won't be fun. I think I'll put some more pictures and comics in that stupid sketchbook.
[-Portion deleted for it being overly trivial-]
I hope you somehow managed to find that The Streets' CD. It's some good stuff. With a bit of luck 89.3 The Current is still around and cranking out the jams. I wonder if Emilie is in Japan right now, she is when I'm writing this. Did you ever get to go as Wallace for Halloween? I'll keep this down to page so I'll be signing off now. Maybe they'll have time machines in your future So you can get off your lazy ass and write me a letter.
Yourself,
-Jesse-
Posted by J-Sea at 1:14 PM No comments: