Well I have some time to kill here at school so I might as well put up an update. It'll probably be some time before I get another comic up, because it is hard to find the drive to do them when there are projects and papers that must be done. However, I don't want to leave everyone hanging so I suppose I'll just keep up these little posts to give something a keep you occupied for a little bit at least.

I'm definitely looking forward to the end of the semester. These has been a pretty damn blah sort of semester and getting back to Minnesota sounds like a pretty sweet concept. An even sweeter concept to think about is Lunch, but I won't be able to enjoy that until a while longer *sigh*

I'm at school right now so I can't really scour my files for a picture to put up. I'm looking through the storage space the school gives me to see if I've put anything of interest in there. The only thing semi-interesting is the song I made for that Electronic Music class I took last year. Although I warn you it is kind of weird. I made it in a video game sort of mood, so it is more random video game tunes than a real "song". Plus it gave me an excuse to use a bunch of Zelda sound effects I found. If you've never played any Zelda game you probably won't appreciate it as much. For the actual project I had to make a video to go with it, so I just ended up throwing a bunch of clips from the Zelda games and commercials together. I'm sure I have that video around somewhere, although I'm not sure where.

Hahaha, I haven't listened to that in a while. For some reason I can just hear some older woman teacher saying to her class, "Ok now, Class. Let's close our eyes and open up our imaginations and let it take us away!" Or something equally silly. You know you've had a teacher at one point in your life who says really weird stuff and gives you a "Wait...what? Did they really just say that?" kind of look on your face.

Actually I've long thought weirding people out would be an excellent punishment for kids. Little Jesse Jr. didn't do her chores and went out partying instead? Well then, guess I'll have to put on some bicycle shorts, a shirt with her picture on it, and some sweat bands then show up at her high school to give her a fresh pair of underwear. I'll bet they won't skip out on chores again...unless of course they've gotten used to such actions by then...sneaky little bastards. Also is there a law saying you can only have a kid be a Jr. if they're the same gender? Because it would be hilarious if you could.
Posted by J-Sea at 2:48 PM No comments:

I was just perusing the pictures on my computer and I came across this one. 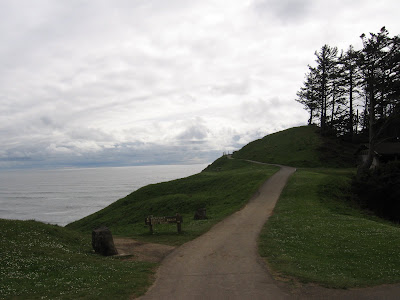 Damn thing surprised me. I'm not one to toot my own horn, but I'm loving the composition of this sucker. Well done me. Now if you'll excuse me, I'm going to go have a cookie.
Posted by J-Sea at 1:36 AM No comments:

Sometimes You Just Need to Take the Computer

Yes! Another post! The sad thing is that the quality on this one is a lot higher and it took me like half the time. So go figure. I finished it right in time to go enjoy a delicious ice cream sundae, so that worked out nicely.

Luckily my brain has stopped me from ever sending a second embarrassing email right after the first, but I think if given enough time I'll get around to it eventually. Which can probably be said about most embarrassing events. I may not have done them all yet, but just you wait. One day you'll find me outside your window, butt naked and expressing my undying love for your sister...wait, shit! I mean you!
Posted by J-Sea at 6:43 PM No comments:

Well I forgot my gray scale markers at home so I made do with what I had. Unfortunately I did a shoddy job of making do so it took me awhile to clean it up on the computer. Despite that here you go.

This is actually a common problem of mine. Way too often I send emails that would be best left unsent. The dangers of instant communication of the modern age, eh? On one hand I guess if you felt enough to write it, it can't be too horrible. Although writing emails in a state is never the best idea because you'll tend to let info out you'll kick yourself for later. Too bad everyone can't just say what they think all of the time. It would probably make for a much better world.

I think I have enough ideas to keep this "story line" going for a few more at least. I'd like to promise you another one for tomorrow, but Wednesday is my busiest day. However, I'll be on campus for a lot longer than usual because I want to partake in the Ice Cream Social for library workers, so I might just have the time to do it. If I can't get one up tomorrow I'll put up the second page to that story from last post. I've been told it isn't as bad as I thought.

P.S. Computers are a pain in the ass to draw...so many buttons. The windows on the screen, however, are quite fun.
Posted by J-Sea at 9:23 PM 2 comments:

Alrighty, this lack of comics is bugging me. Time to do something about it. Comic will be up tomorrow and a few others throughout the week.

Here is another random comic from my computer that I did before this whole site thingy. Just something to tide you over. Overall I really like this one...except for that last panel which is shitty. Was actually the first page in an actual story, but I never got past 2 pages...probably because page 2 sucks. 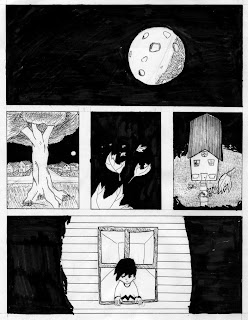 Also I've just realized something; recently I've started doing a lot of the things that I usually only think about and never act on. I mean I've been trying to learn how to be a good cook/baker, started learning how to skateboard, making progress on my lack of crossword skill, and even started this here comic blog. Hopefully I'll be able to keep this self-improvement train running.
Posted by J-Sea at 12:23 AM 4 comments:

If I don't have any real art for you I might as well give content of some sort, just in case people keep checking for updates and are continually disappointed. So here is a rant about Dave Kellett's ego. I figure it is comics related, plus it has been bugging me.

So I was reading the blog at the webcomic Sheldon and the creator (Dave Kellett) was saying how happy he was about his new baby. Awwwww. But then at the bottom he has a little note explaining why he will not say his child's name and from now on won't post any pictures of her. Why? Apparently he leads such a public life and doesn't want to force such a life on his kid. "I want to give her the gift of anonymity to become her own person in life." No offense to Mr. Kellett, but this bothers me. It does so because it hits on one of my major pet peeves: people with big egos. Last time I checked he was still a webcomic artist and not the hit new movie star. Does he have paparazzi continually after him trying to get a photo? Take a moment and think to yourself, "How many of my favorite comic creators would I be able to recognize on the street?" I'll bet the number isn't very high. Increase the question to include the extended family of your favorite comic creator and I'd wager you don't have a very large number going there. A public life? Come on Mr. Kellett, you're an artist. Unlike musicians, artists don't have to be in the room with you to experience their creations. Not putting up photos? Sure, maybe you think some weirdo fan on the street will recognize her. I can understand that. I'll even let you get away with the name bit, but come on! Don't spout this high-and-mighty junk as if you're living a life that actually gets that level of publicity. You might be popular, but you aren't even close to being that popular.
Posted by J-Sea at 6:22 AM 1 comment:

Damn, I haven't updated this thing in a long time. Sorry about that. It is just that time of season where all the things I've procrastinated on come back to bite me in the ass. I'm definitely looking forward to the upcoming weekend so I can relax a little bit. I'll probably get something out sometime in the near future, but I can't make any promises. I'm trying to find a good deal on a scanner and then once school is over I'll be able to update to my heart's content.

Well time for some more work.