I am nothing if not prepared (pause for laughter), so before starting to draw some postcards I decided to create a test card. That way I could be sure that: A) it gets to its destination, and B) it arrives in one piece. At first I was just going to scrawl the word "testing" all over it and then send it on its way. However, after doing that a couple times I decided to make it harder on myself by trying to actually make it look halfway interesting. 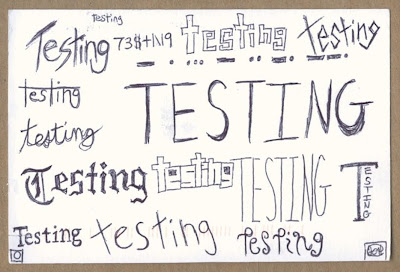 Anyways, it made it through the post office and safely to its destination. Well, technically that isn't exactly true; it had a little scratch and a little tear in it, but for the most part it arrived in good condition.

This means that I can now start working my way through this list. Actually I've already started, so we'll see how long it'll take me to get a batch of them sent out. Be warned that I'm currently employed, trying to study for the GRE, about to move, and somewhat lazy. However, I'll try to be as quick as I can.

For all you fashionably late people, I should mention that I'm still taking requests and will be doing so until I explicitly state otherwise. So if you still want a postcard, you can definitely still get one.

Anyways, sorry for the lackluster posting this month. To make it up to you here are some postcards I made as Christmas gifts for my aunt Rosemary. 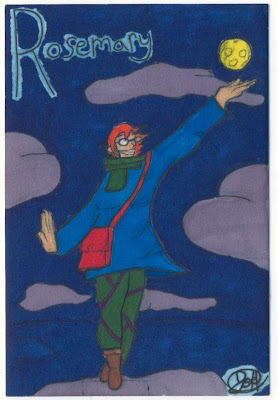 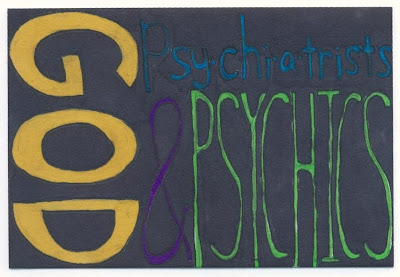 These two were actually made on different card stock than the kind I'm using for the Extravaganza cards. You might remember it from that Charles Schulz card I made. You might also remember that I hate it and it ruins everything. Luckily my aunt has helped me find an alternative and thus it is because of her that your cards will look much nicer. She has my most sincere thanks for all her help with this project.
Posted by J-Sea at 4:45 AM 3 comments: 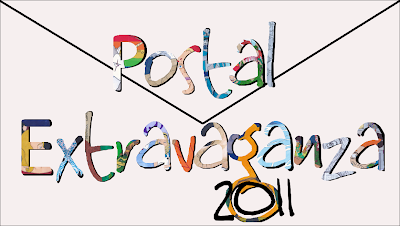 It's that time of year again. Time for another Extravaganza of Postal Proportions!

In case you don't remember, in 2009 I decided to combat the stagnation of Facebook friendships by offering to send them all a hand written letter. 34 of them, representing 4 different countries and 13 different states, responded and thus 34 people got some sweet, sweet letters. Each with a personalized envelope no less. (The last batch and links to all the rest can be seen here).

This time I'm switching things up a bit. Instead of letters I'm going with postcards and instead of limiting myself to Facebook I'm opening up the offer to anyone.

Here's how it'll work, if you would like to get a hand drawn postcard from me then all you have to do is follow these easy steps:

1) Send me an email (excusethequality at gmail) telling me you want one. Make sure to include your name and address/PO Box/whatever, because otherwise I won't know where to send it. If you happen to have a request for your postcard's drawing then you can feel free to include that as well. Otherwise I'll just draw whatever I happen to feel would be suitable.


And that's it! Just think of the jealously you'll inspire in your household. The sweet, sweet, jealousy.

Keep in mind I'll be making a different postcard for every recipient...and I'm pretty lazy, so don't be surprised if you have to wait awhile for yours to arrive. I'll be doing them in the order people request them and thus first come, first served. So join in the fun!
Posted by J-Sea at 6:18 PM 1 comment:

State of the Blog Address

Happy New Year to you, dear reader. In case you don't know me, my name is Jesse. I write/draw/make all the stuff round these parts. Being a reader of this blog automatically makes you one of my favorite people. Way to be awesome.

Anyways, another year has come and gone on this simple blog. At the beginning of 2010 I had a goal to make 100 posts that year. Clearly I was way off. However, since that year was pretty awful and since the posting has been improving in quality, I'm going to chalk it up as win regardless. Actually some of my favorite stuff yet was done that year. We had the conclusion of the Postal Extravaganza envelopes, the Holiday Haiku trilogy, The Breadfruit, Throawae, and a bunch of other stuff I quite enjoyed.

In other news, Excuse the Quality now has a Facebook page. If you're on Facebook it provides a convenient way to get updated on new posts and other news. For instance, if you were a fan of the Facebook page you would have known there was a Facebook page for it way back in November 2010! If you're not on Facebook then I guess you'll just have to stick with the old fashioned way and just check in every once in awhile. If you have another way you'd like to be informed about updates I'm certainly open to ideas.


Well, that just about covers everything. I think I'll end this post with another edition of:

1. I really like the comics. Why aren't there more of them?

I'm glad you like the comics. I like them as well. However, comics are something I do when I'm happy. 2010 wasn't a very happy year and thus there were not many comics made in it.

2. Are you going to draw more comics?

Yes. Probably. I'll try okay? That's the biggest promise I'm willing to make. I will try to draw more comics, because I loves you gals/guys.

3. If, in the future, you were to be arrested, what would the charge most likely be?

4. How many readers do you have?

More than enough to cause a disturbance, but not quite enough to stage a riot.

5. How are you doing today?

I'm cruising the middle grounds of emotion today. I would certainly be doing better if I didn't have a hankering for some Schweppes' Raspberry Ginger Ale. I am beginning to doubt they even sell it anymore because I can't find it anywhere. If I ever do find some more I'm buying a shit ton of it because it is freaking delicious.

6. Do you know the whereabouts of Ms. Victoria Penot?

Umm...I think that's enough with the questions for today.