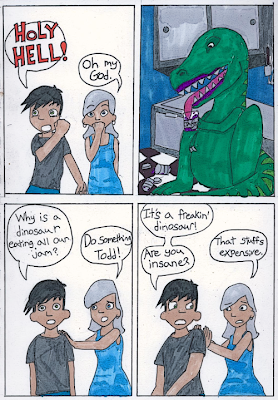 I gotta side with the girl on this one. Jam can be pricey stuff. Just think about it. Let's say you get yourself a real nice 12oz jar of jam for $6. That's 50c an ounce. 128 fluid ounces in a gallon. So that means that jam is worth $64/gallon. And people think $4/gallon for gas is high. No wonder dinosaurs have to resort to stealing the stuff, poor little fellers.


Randomly:
Dear Mark Tatulli,
In regards to today's Heart of the City comic strip. Did you really think drawing two characters, small enough to easily fit into one panel of a weekday strip, and then placing them on either side of a giant Sunday panel was a artistically pleasing idea? You didn't even bother to draw a background, you just put in a blue gradient. And all for the sack of a simple spinal tap joke? Were you just super lazy this Sunday or what? Usually I enjoy your strip, but for Pete's sack man, put some effort into your work. No one wants to open the Sunday Funnies to see something that a 4 year old could cut and paste on photoshop. If you'd rather spend your time doing other things than working on your comics maybe you should step down from your newspaper post and let someone else in.
Posted by J-Sea at 1:09 PM