Recently I've been assigning my self one small part of my room to clean everyday. That way it won't be such a daunting task. Today's job was to clean out underneath my bed. While I was under there I came across one of my old sketch books. It was chalk full of embarrassingly horrendous drawings. So, naturally, I thought I should show scan a few to share with you. 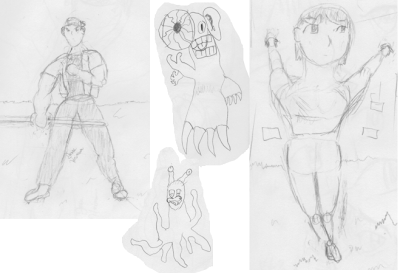 Yup. And remember these are the cream of that crop. The rest of the pages are filled with images so shitty I can't bring myself to show anyone else. My favorite being a picture I did practicing doing proportion stuff. It features a little dude with just plain ridiculous proportions and in my excitement at completing such a "great" picture I drew him saying "Wow I'm getting it." Obviously he was far from getting it. The only thing worse than bad pictures is distinctly remembering that you had once thought that picture was awesome.

Then I came across a notebook I had completely forgotten about. It was a little sketch journal I took with me to work last summer. I used it to write down little thoughts with an image to go with it, or sometimes I'd doodle characters to help pass the time on the bus. 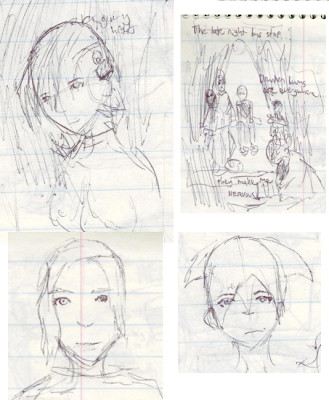 I mostly picked some of the character pics because while the silly stuff still cracks me up it requires explanation from me in order to get the joke and I don't want to bother. The late night bus stop haiku, however, is self explanatory. Unlike most old sketch books I actually like a lot of stuff in this one. The most interesting thing is that the stuff I've been drawing now looks nothing like this. Let's take a look at my current sketchbook so you can see what I'm talking about. 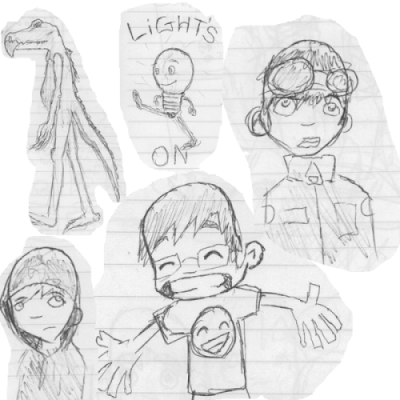 I hadn't even noticed the shift between trying to do somewhat realistic stuff to more cartoony work. Also why on Earth do the comics I post look worse than my sketches? That seriously doesn't make a whole lost of sense. My only guess is that I'm insane or that I secretly hate you all and thus want to injure your eyes

Ok well I should probably eat something and then get back to work cleaning off my bed. 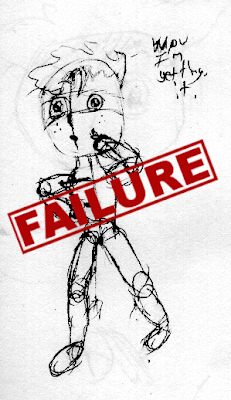