So today I decided to skip my classes. Take that classes! One class turned out to be canceled today and the other apparently showed the most boring documentary imaginable. Yep...I am pretty happy with how things have turned out today.

In other news today (Jan 27 as of the moment at least) is my friend Ana's birthday. Although I only got it done a few minutes a go I made a birthday comic. Although it isn't for you there are some parts everyone can enjoy..probably. You be the judge! 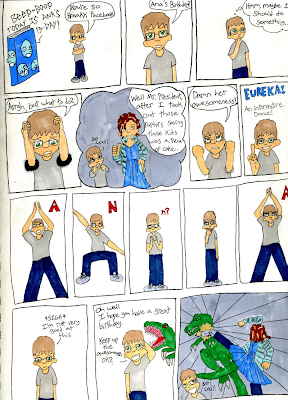 While I've never seen her do it I am reasonably sure she could hold her own in a raptor fight. She could probably also figure out how to make an N-shape with her body. As this comic illustrates I have no idea.

Either I need to start using a bigger scanner or smaller paper. I'm trying to start inking and coloring my images, because I'd rather be able to do things myself than have to rely on a computer to help. I need more markers. I have a bunch, but I still want more.

Sadly I will probably be up for a long time after I finish writing this. I have a lot of procrastinated work I need to accomplish for classes tomorrow. So that will not be enjoyable. Chances are high I will have to consume nasty tea in order to pull it off. On the plus side I have work tomorrow (actually today now) as well as Go club. Two things that are always fun.

Now let's take a moment to bask in my social awkwardness. I have 2 accounts for you.
1)My roommate told me today that she got an interview with the Jet program. I had to do all I could to try not to go "Duuuuuuh". In doing so I created an appearance of self-centered non-caring. When in truth it just never came into my mind that she wouldn't. Her Japanese is freaky good.

2)While walking out of class and heading to a different class I was lost in my own head and not paying much attention to what I was doing. This led me to get my hallways mixed up and instead of following a girl to the stairway I nearly followed a girl into the bathroom. Once again proving that I am the king of awkwardness. You may bow if you so desire. It takes years of practice to get this good.

I'll try to finish up another picture I've got going and keep the updates coming. But by now you've probably learned to disregard such things and for that I thank you.
Posted by J-Sea at 1:55 AM