No means No, amiright, People? 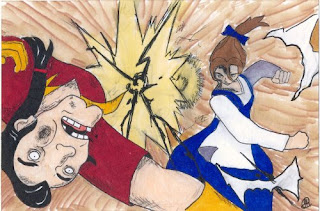 And wouldn't it have been a much more satisfying movie if at some point Belle had defended herself instead of putting up with Gaston's incredibly inappropriate attitude towards women? I mean, holy crap, I think we all got the sense that if Disney wasn't the puppeteer of this story Gaston would have tried to rape Belle. He saw women as objects to be won and couldn't conceive of a woman who wasn't interested in him. I mean, talk about creepy.

Everyone gets on The Beast's case because he was aggressive, blackmailed Belle's dad, and kind of kidnapped his daughter. But let's be realistic here: he'd been turned into a monster and has been talking to furniture for Lord knows how long. It's fair to assume that he's gone slightly insane and forgotten what does and does not constitute appropriate social interaction. So frankly I'm willing to cut him a break.

People love to hold up this movie as the unsettling example of a story that teaches girls that beastly men can be changed. I couldn't disagree more with that reading. The Beast was a snotty little rich kid who didn't know any better. Instead of teaching him empathy the witch unjustly confines him to solitary, which is the opposite of what he needed! He needed to be away from his family and around normal people; he needed to have the shit kicked out of him and have his heartbroken.

Their strange lens for the story doesn't hold up because 1) The Beast is socially incompetent not a douche like Gaston and 2) Belle doesn't fall for him and then try to change him. She doesn't even want to be around him when he's acting like a jerk. It's only after he starts seeing things from her point of view and trying to be a better person that she warms up to him and realizes that he's not a bad person: he's just a guy who got an incredibly raw deal, is rightly full of anger and resentment about it, and is trying (and succeeding) to be a  better person. She doesn't try to change him, he tries to change himself and she agrees to help him.

So there you go. I've obviously thought about this movie far too much.
Posted by J-Sea at 11:01 AM