All Work & No Play

For quite awhile the theater where I work has been showing extremely long movies. Usually in the area of 2.5 hours. Because there is usually only one person working at a time, we aren't supposed to sit down and read a book or other such activities. Instead we are supposed to find things to clean. Some things legitimately need cleaning, while other things do not.

After about 2 hours of cleaning you start to lose your mind a little bit. Since at that point the movie is almost over it is a perfect time to find something else to do. In this window of free time I will sometimes doodle. For instance here is a little stand-up picture I made. 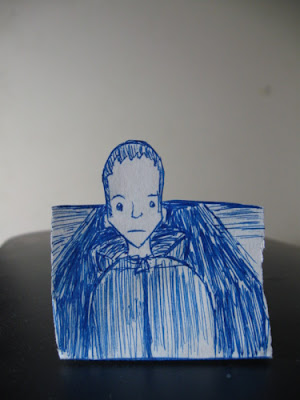 I later realized that I might get in trouble for not doing any work and just doodling, even if it was for such a short time. Instead of just stopping outright I decided that while doodling randomly might be looked down upon, but doodling with purpose might be a grey area.

Currently the theater is doing a Cary Grant series on Mondays. To advertise this they have postcard sized schedules of what movies will be shown and when for people to take. However, for a while we ran out of them. Herein lied my opportunity. Certainly taking time away from cleaning to fashion new schedules couldn't be bad, right?

So, using the scrap paper we use for writing notes/taking messages and a ballpoint pen, I set out to create some cheap schedules. Not only would it give me something to do, but I could then use them to get people to stop asking me what all the movies were and on what days. I made my first one and then traced it for the next one, and then traced the new one for the next one. Thus like a game of telephone each successive schedule became slightly different with each added flair and with every slip of the pen. At the end they were looking like this. 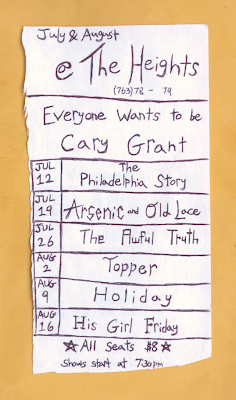 I even managed to find a brilliant picture of Cary Grant in a separate advertisement flyer we had around so I cut it out and taped it onto the back. 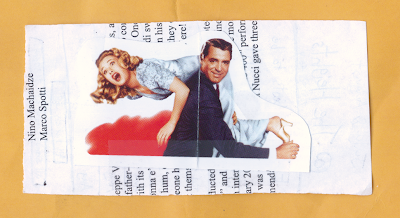 Although I decided that disfiguring flyers would probably be frowned on...along with wasting tape. Therefore only the first two had such wonderful backs.

I kind of like them actually. They're easy to put into pockets, they're unique, they're quirky, and they're cheap as hell. Their only downside was that they took too long to make. Although that problem would be easily fixed by making one good one, scanning it, and then fitting 6 of them onto a sheet and printing that. But obviously I wasn't about to go that far. The other obvious problem was that I never gave any out because I wasn't sure if I should and I was too embarrassed to ask.

The theater is going to be doing a Sci-Fi series in a few months so I think I'll do another schedule for that. I want to do this almost entirely because one of the movies features a picture of a robot carrying off a woman, and another has a giant ape carrying off a woman.

This means that there's a common theme for both these series. And that theme is pretty ladies getting swept off their feet.
Posted by J-Sea at 11:50 PM