Lame Comics? For You!

I might end up doing some more super lame comics for you tonight seeing as I have nothing else to do, but we all know how bad I am about things like that. 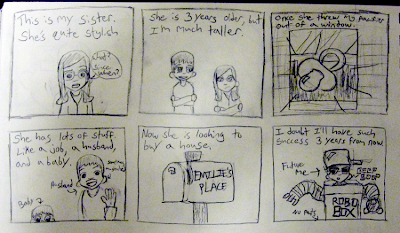 +Well I suppose I'll probably have assembled some Robo-Pants for my Robo-Box in 3 years time, but I still doubt I'll have reached her any semblance of her level of adult-hood. Wow I made this one a little too small. In case you can't read it the little note next to my sister's husband says, "sometimes mustache"...because sometimes it's there and sometimes it isn't.

+In case you were wondering, I did indeed want to be a Marine Biologist when I was little. The dream ended when I realized their job wasn't nearly as 10,000 Leagues Under The Sea as I had imagined.

Hmmm...I don't really like either of these comics...oh well. Better luck to me in the future.
Posted by J-Sea at 11:26 PM